Olfactory perception is the sharpest of our five senses

No sensor is as powerful as the human nose. No scientific apparatus possesses such amazing abilities.
Both nose and mouth are involved in tasting. We might say that the palate is in the nose, as what is perceived by the nose (smell) and retro-nasally (aroma in the mouth) blends together and complements each other.
Olfaction is the prevailing sense involved in tasting wine, coffee or whisky, accounting for 80% of tasting perceptions (remember that you can hardly taste anything when you have a cold).

How the sense of smell works

At the top of the nose cavity lies a small tissue with a surface area of 3 to 4 sq cm. This is the olfactory epithelium, covered with mucus that bathes the receptor cells.
Each cell has around twenty cilia carrying approximately one thousand protein receptors per square micron on their outer surface.
Upon arrival in the back of the nasal passage, an odoriferous molecule works like a volatile chemical signal, dissolving in the mucus and combining with proteins in the receptors to generate a whole series of reactions. This chemical message is instantly turned into an electrical message, which is projected in the form of an image onto the olfactory bulb.
The olfactory bulb might be said to correspond to the retina in the eye and the image of an odour on the bulb to that of an object on the retina.
The image is then processed in the deepest recesses of the brain and reduced to an outline in the piriform cortex. Then it is logged in the memory bank and compared to others in the temporal lobe, recognized and associated with a pleasurable element in the far lateral hypothalamus. 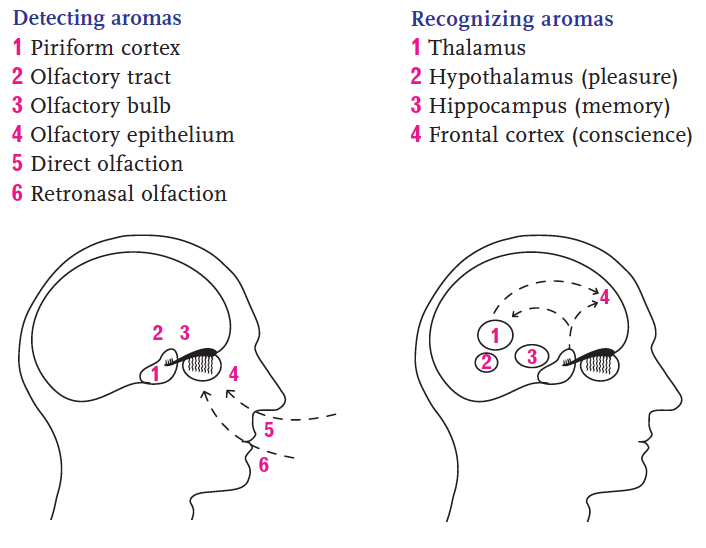