Jean Lenoir decided to introduce taste and smell into the world of culture, and presented wines of France and of the world at the Maison de la Culture in Chalon-sur-Saône, the 14th cultural center in André Malraux’s project, where he then worked as Assistant Director.

He studied with Max Léglise, oenologist, researcher, and one of the originators of sensory analysis, at the Station œnologique de Bourgogne (INRA, Beaune, Burgundy).

It was a revelation! He realized the rich diversity of aromas found in wine.

Jean Lenoir launched the first cycle of introductions to wine tasting in a Maison de la Culture with Georges Pertuiset, who won the prestigious award of Meilleur Sommelier de France in 1980. Jean Lenoir was the first person to bring wine into a cultural institution, like a work of art, on an equal footing with music and painting.

Jean Lenoir received a vocational degree in oenology from the Dijon University Faculty of Sciences. 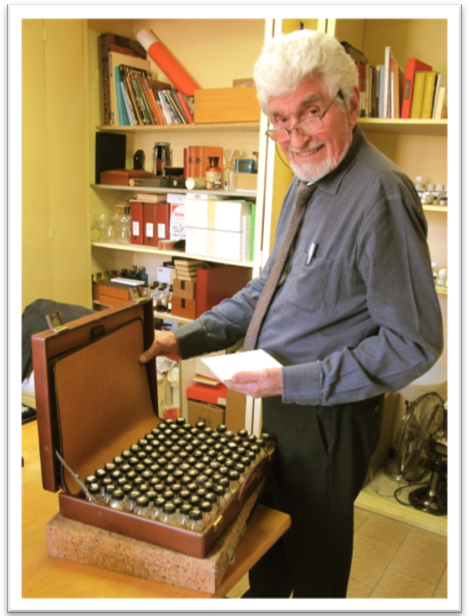 He used an aroma-case containing 120 aromas to teach introductory courses throughout France, with great success everywhere.

"Jean Lenoir is a tremendous connoisseur whose cheerful passion wins over all audiences" Christian Millau said, one of the two founders of GaultMillau.

Artist Daniel Spoerri, famous for his « snare-pictures», which are mainly vertically immortalized remains of meals, gave Jean Lenoir the idea of artist’s books, book-objects. Just as the work of Daniel Spoerri, who opened a restaurant where he cooked, appeals to several senses, our book-objects call upon multiple sensory experiences, sight, touch and smell, breaking from the conventional way we relate to books. 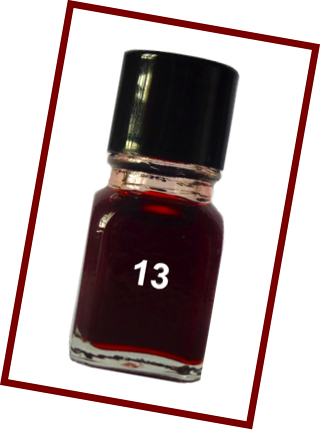 That year, at the Paris Packaging Exhibition (Salon Emballage), Jean Lenoir chose the encyclopedia format and the vial, which still are the trademark of Le Nez du Vin®. 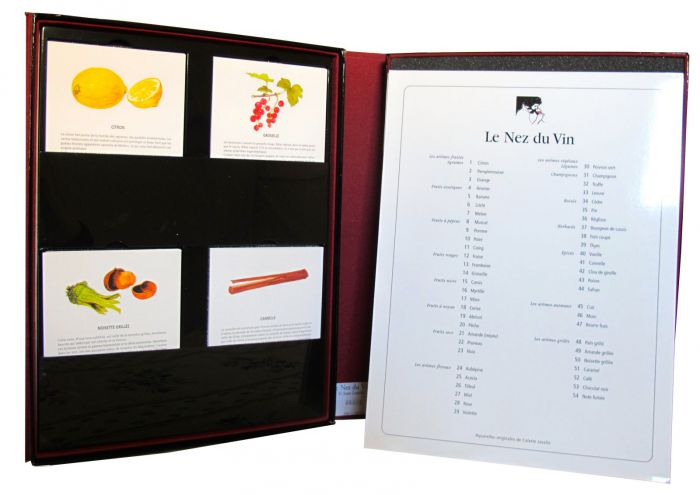 This unique book-object, combining writings and scents, sparked immediate surprise and admiration from all, specialists and neophytes alike. 1000 copies sold by subscription.

The Editions Jean Lenoir company was founded in Carnoux-en-Provence, a few kilometers away from Cassis, at the heart of the hills that extend the Massif de Saint-Cyr to the East. 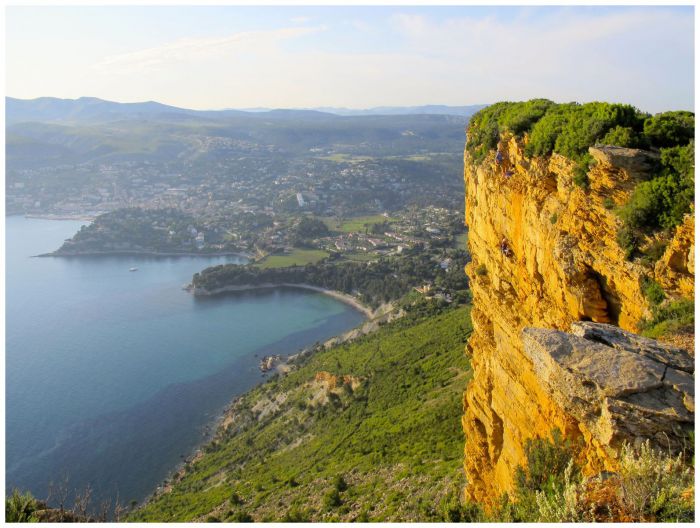 Le Nez du Vin® was translated into Italian and presented in Verona and Naples.

It was also launched in Japan. 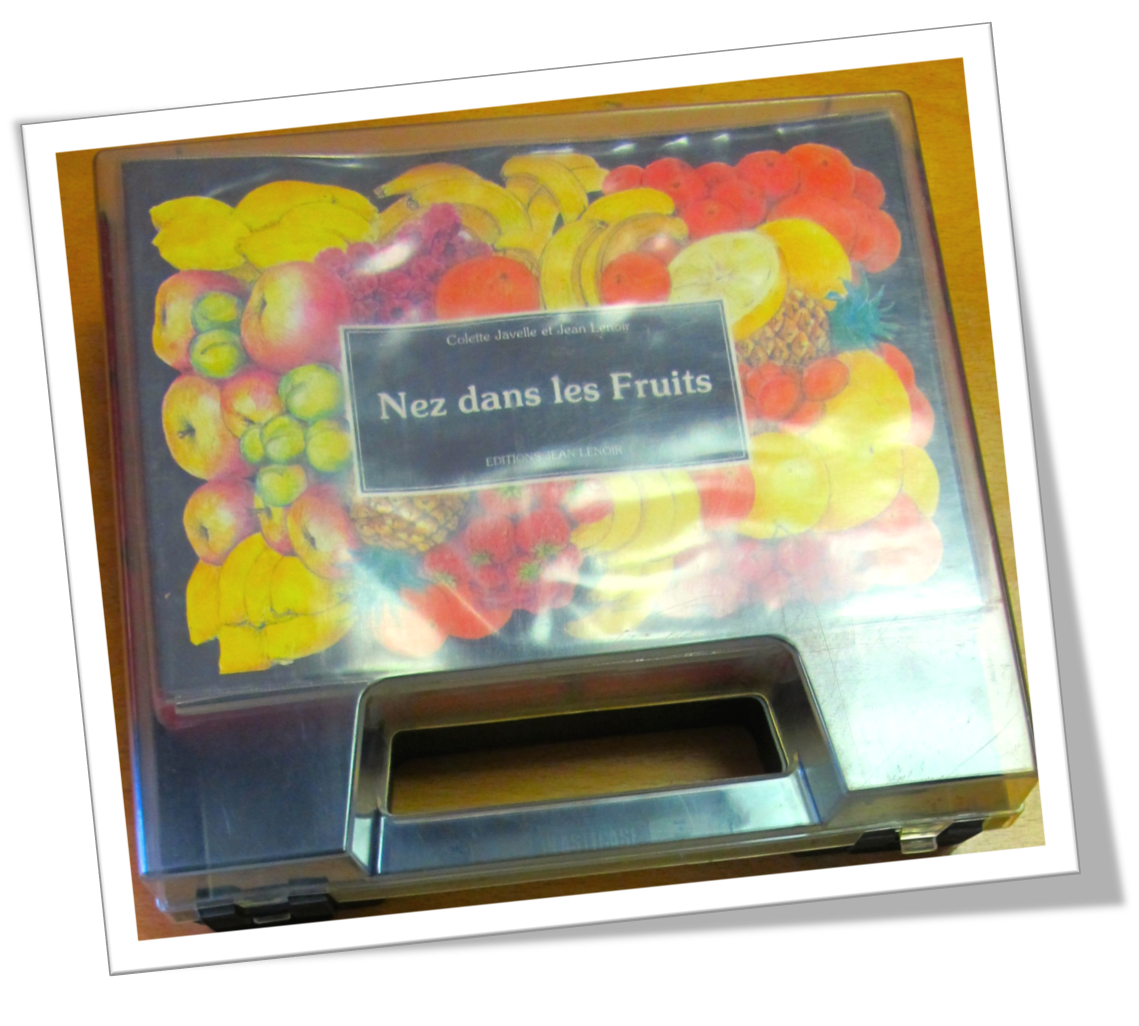 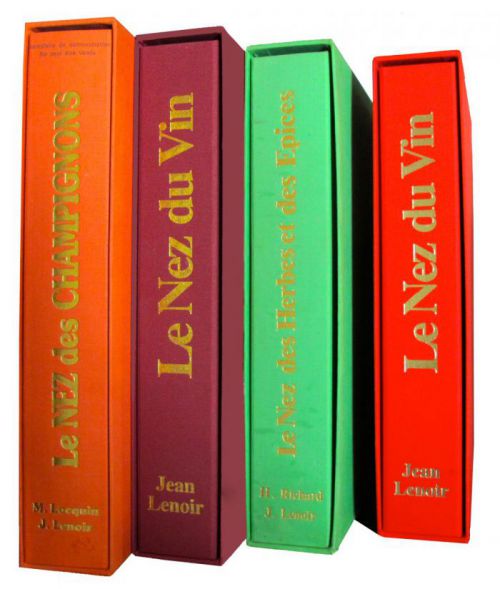 He worked to uncover the secrets of these discreet guests of prairies and forests, to be found hidden under unexpected fungus smells of flour, coconut, camphor and primrose in the spring and autumn. 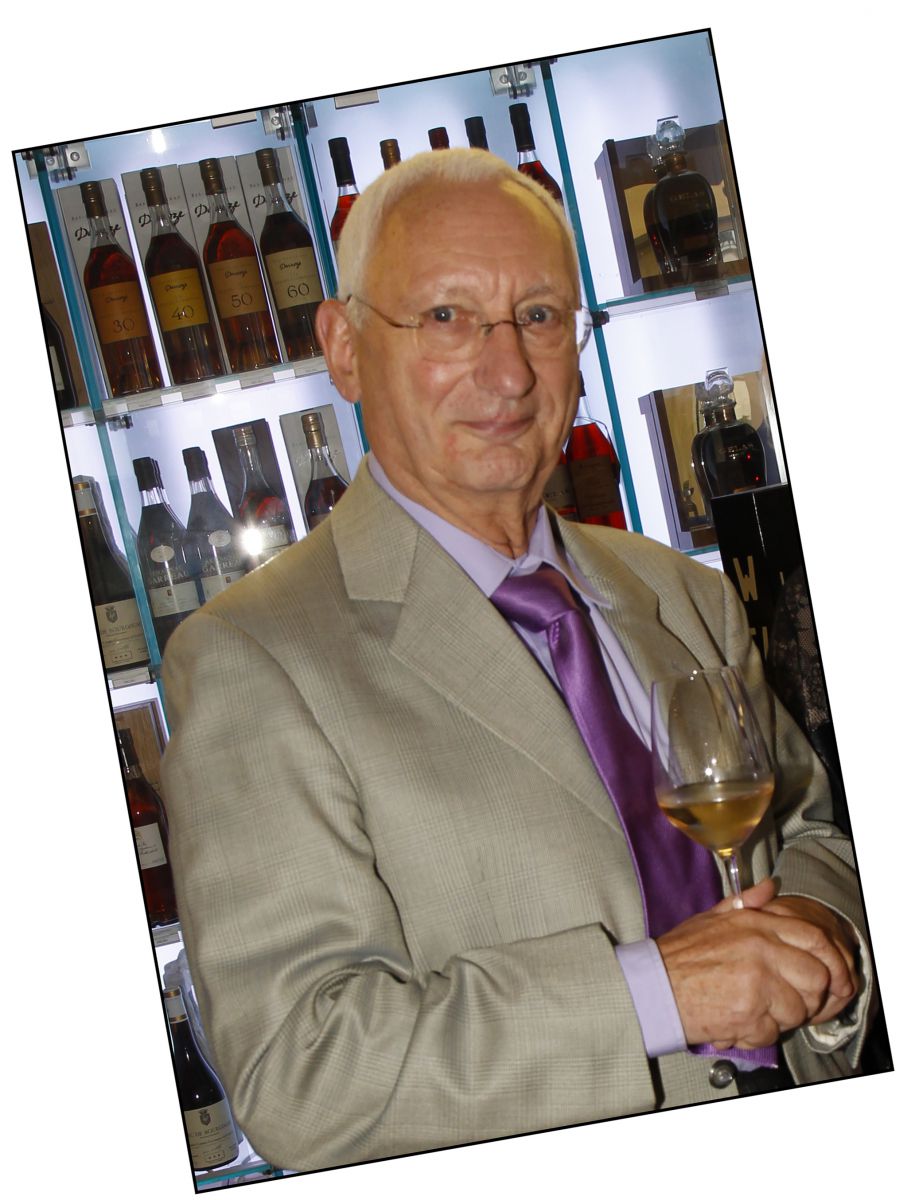 Creation of Le Nez des herbes et des épices® (Make Scents of Herbs and Spices) 54 aromas in collaboration with Hubert Richard, an engineer with a degree from ENSIA (Ecole Nationale Supérieure des Industries Agricoles et Alimentaires). He worked as a researcher at INRA (Institut National de la Recherche Agronomique) from 1965 to 1970, then returned to ENSIA, where he became head of the professorship in Food Chemistry, and is now Professor Emeritus.
Specialized in the aromatic quality of food products, he focused his research on essential oils and aromatic preparations, studying different aroma extraction methods.

It was the start of a longstanding collaboration between Jean Lenoir and the man he describes as the « scientific mentor » of his publishing house.

At the request of the Drome Departmental Council, Jean Lenoir created Le Nez de la Drôme®, with the participation of Anne Simonet, a journalist and author of several books on wine, fascinated by aromatic plants. This was the first olfactory guide to discovering a region through its scents. The 12 aromas, including garlic, Picodon cheese, olive oil, lavander, and truffle, allow you to take in the essence of the Drôme region.

The same year, Jean Lenoir stuck his nose into the glasses of a neighboring country, Portugal. With the help of the Laurent-Perrier Champagne house, the distributor of Taylor’s Port in France, he developed Le Nez du Porto®, the 12 main aromas of the Lusitanian fortified wine, including cherry, walnut, coffee, licorice and violet, found in tawnies, late bottled vintage (LBV) and vintages.

A pioneer in this field, Jean Lenoir took up again his idea of developing the sense of smell in children, and came up with Le Nez des Enfants®, which was approved by the Institut Français du Goût founded by Jacques Puisais, who initiated a sensory development method, introducing the sense of taste in primary schools in the 80’s. 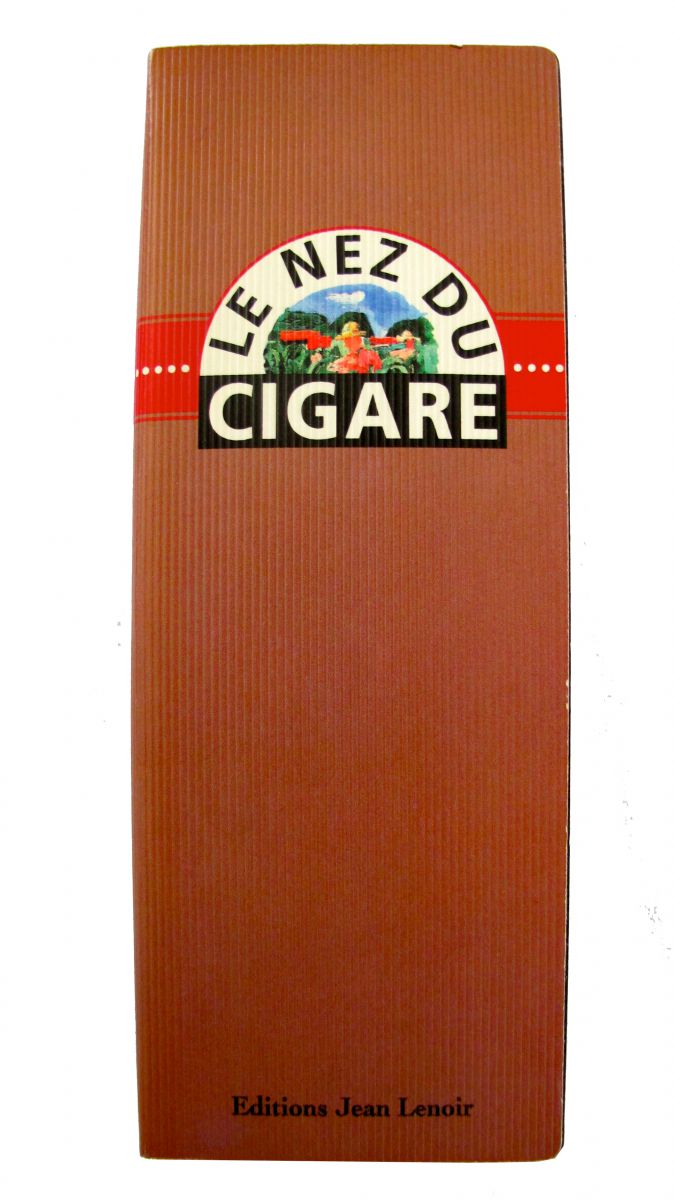 In May of 1996, Jean Lenoir was invited to Colombia along with five famous chefs, a chocolatier and a sommelier from France. On the occasion of the International Book Fair in Bogota, where France was guest of honor, the National Federation of Coffee Growers of Colombia, Federación National de Cafeteros de Colombia (FNCC), staged the country’s first French Cuisine Festival. 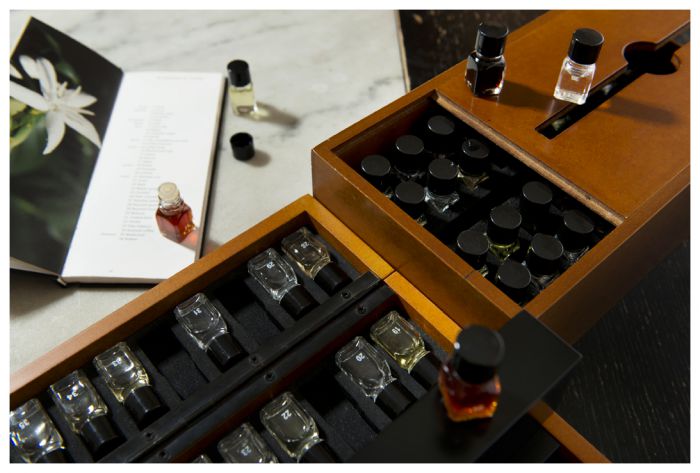 A visit to the provinces of Quindio and Risaralda, to the Monte Negro National Park and Coffee Museum opened for Jean Lenoir the doors to the wondrous world of coffee and its growers, « cafeteros ». And the heads of the National Federation of Coffee Growers of Colombia also realized the need to develop such a tool to convey and champion the aromas and taste of coffee. After several more months of research work, Le Nez du Café® was launched in Colombia in October 1997, for the 70th anniversary of FNCC.

To select the odorous compounds most characteristic of the world’s coffees, to compose one by one the 36 aromatic notes that make up Le Nez du Café®, Jean Lenoir worked hand in hand with two leading experts, passionate about how aromas are expressed in tasting, biochemical engineer David Guermonprez, and taster Eric Verdier.

The contents of Le Nez du Vin® 54 aromas were internationalized, perfected and updated thanks to significant scientific progress made regarding the sense of smell over the years. 14 new aromas were added to the selection, and the classification was organized by aromatic groups. 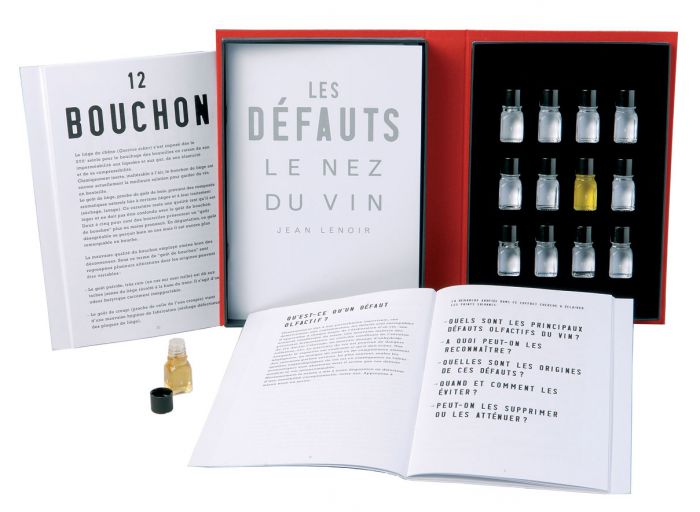 Wine faults, up to then 6 aromas in Le Nez du Vin® 54 aromas, evolved into a fully-fledged kit of 12 aromas. 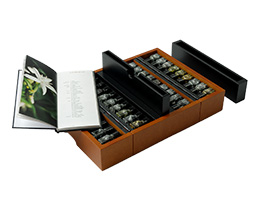 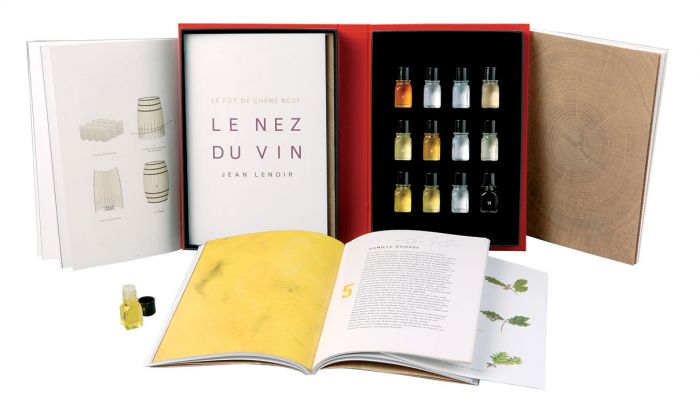 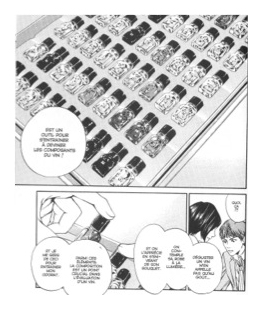 Jean Lenoir appeared in the first volume of Drops of God, a best-selling Japanese manga series about wine, where the main character chooses Le Nez du Vin® to develop his olfactory perception and learn the art of wine-tasting. 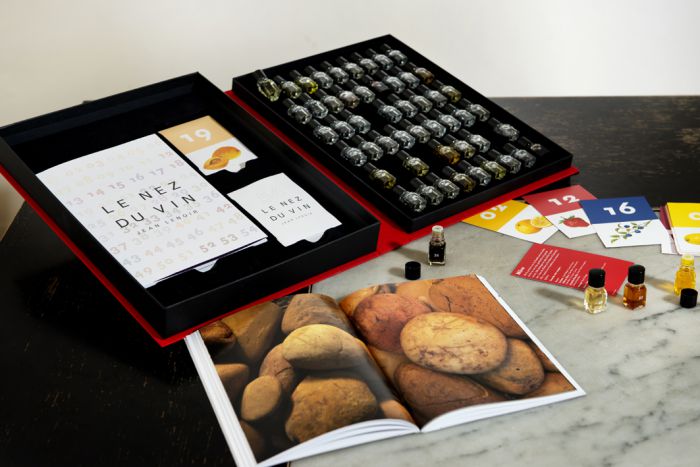 The talent of graphic artists Dirk Behage and Evelyn ter Bekke, who have been entrusted with the visual identity of Editions Jean Lenoir since 2004, bore fruit: for the 25th anniversary of Le Nez du Vin®, the entire collection was republished, redesigned, harmonized, modernized and embellished.

The contents of the books were also updated. 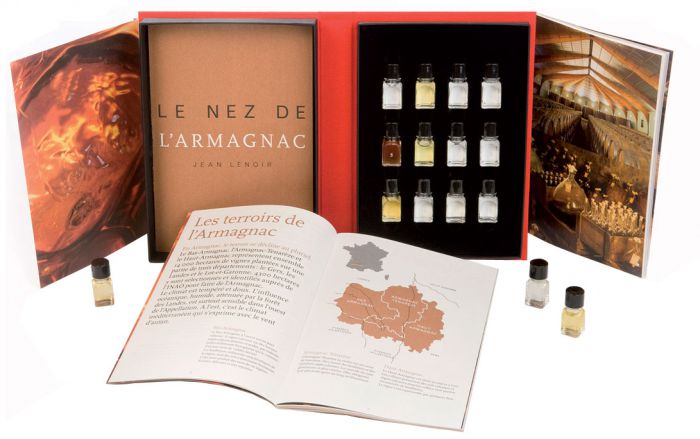 Inauguration of “Espace Jean Lenoir – Le Nez du Vin® ” at the renowned National Kaohsiung University of Hospitality and Tourism (NKUHT) in Taiwan.
Asia’s first center devoted to teaching smell recognition and memorization was designed in the shape of a gigantic egg, symbolizing the birth of olfactory education in Taiwan. This design and technological prowess was made possible by the dedication of professor Chen Chienhao, trained at the Institut de Recherche de la Vigne et du Vin (Institute of Vine and Wine Sciences) of the University of Burgundy, and designer Ke-Chung Lee. It took four years to build and won a design award. Aromas are diffused from 60 large hand-made celadon-color ceramics vases. 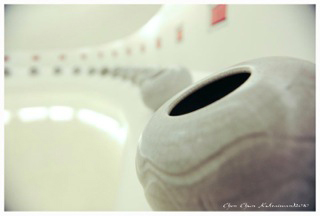 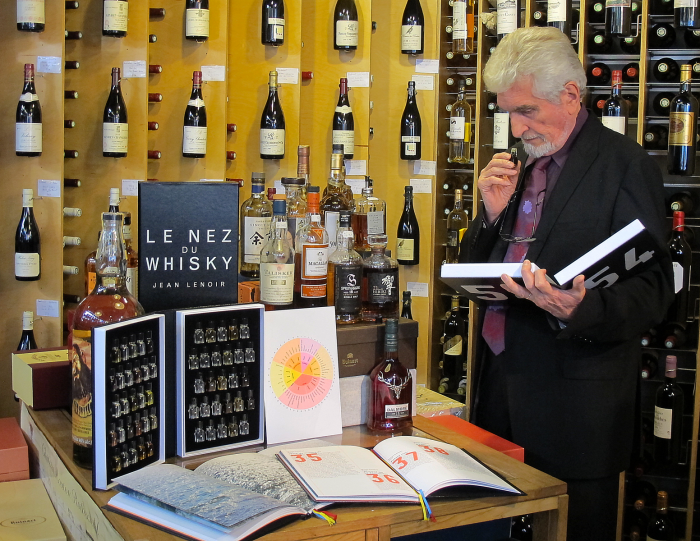 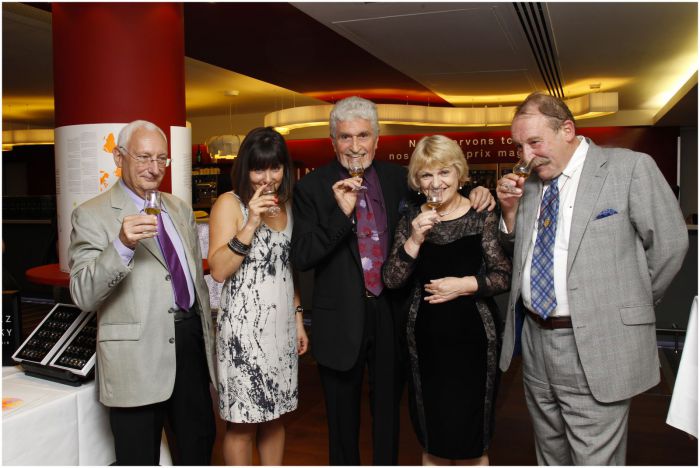 After nearly forty years in Carnoux-en-Provence, the Editions Jean Lenoir workshop moved a few kilometers to new premises in Cassis, in the heart of a range of hills that extend as far as Cape Canaille, the highest sea cliff in Europe

Le Nez du Vin Oak 12 aromas has been updated throughout and adorned with a new bright green case.
The book, based on the most recent discoveries in forestry and chemistry, is authored by Léa Desportes, Head of L'Ecoledu Nez in Paris, and prefaced by Philippe Darriet, Director of the Oenology Research Unit of the Bordeaux Institute of Vine and Wine Sciences.
Accompanied by a set of aromatic cards, the selection of 12 aromas has also been updated and is enriched with new aromas including burnt sugar, roasted coffee and candied orange.

The latest brewin the collection, le Nez du Bourbon, was released in October. The foreword is by Chris Morris, Master Distiller at Woodford Reserve. The book, written by Hans and Becky Offringa, aka The Whisky Couple, recounts the history of the most famous American whiskey and details the secrets of how it is made.
A map of American distilleries complements the luxuriousleather box. The 12 aromas from Le Nez du Whisky have been carefully selected to match the tasting notes of the greatest whisky tasters.